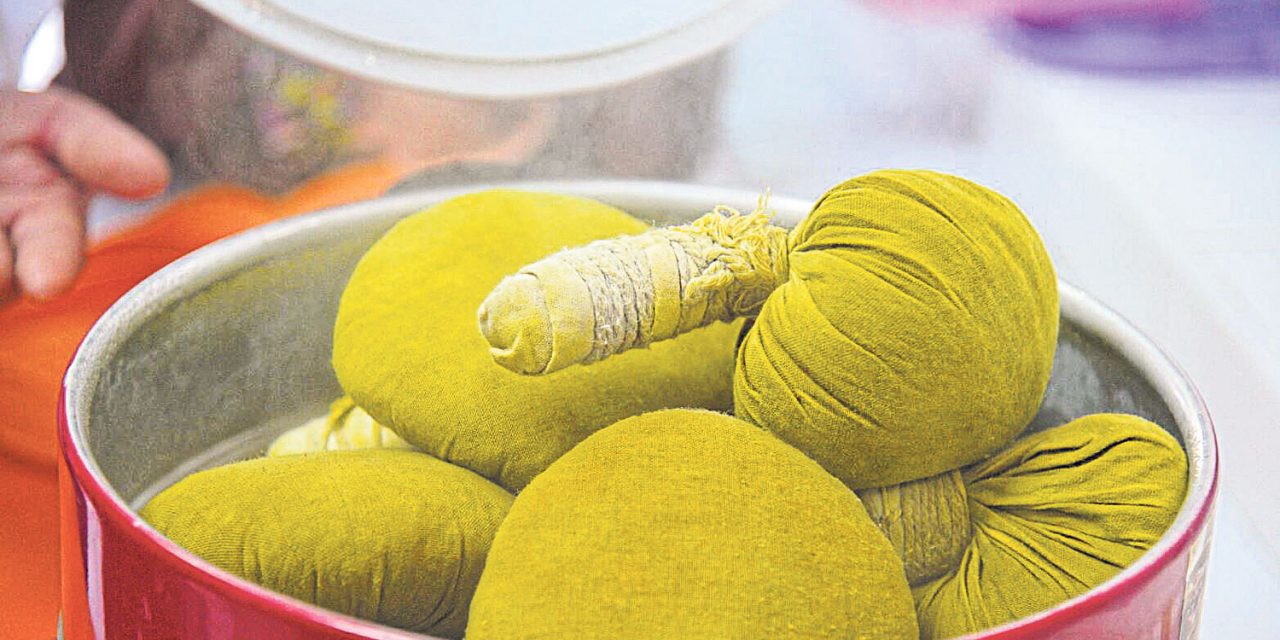 After having been almost bed-ridden for 10 years, 61-year-old Charan Anusonthi has regained enough mobility to move around more freely thanks to regular physiotherapy sessions at a new rehabilitation facility in his community in Chiang Mai’s San Kamphaeng district.

Before the centre — designed to serve both elderly and disabled people — opened last year in tambon Mae Pu Kha, Mr Charan had to journey far to San Kamphaeng Hospital for therapy.

The constraints from the frequent trips to town were daunting, which explained why he missed some appointments with doctors, which hindered his recovery.

“I’m ever so glad to be able to walk again and take care of my mother and others,” said Mr Charan who had been bed-ridden as a result of injuries he sustained in a road accident which left him feeling “miserable” and “helpless”. 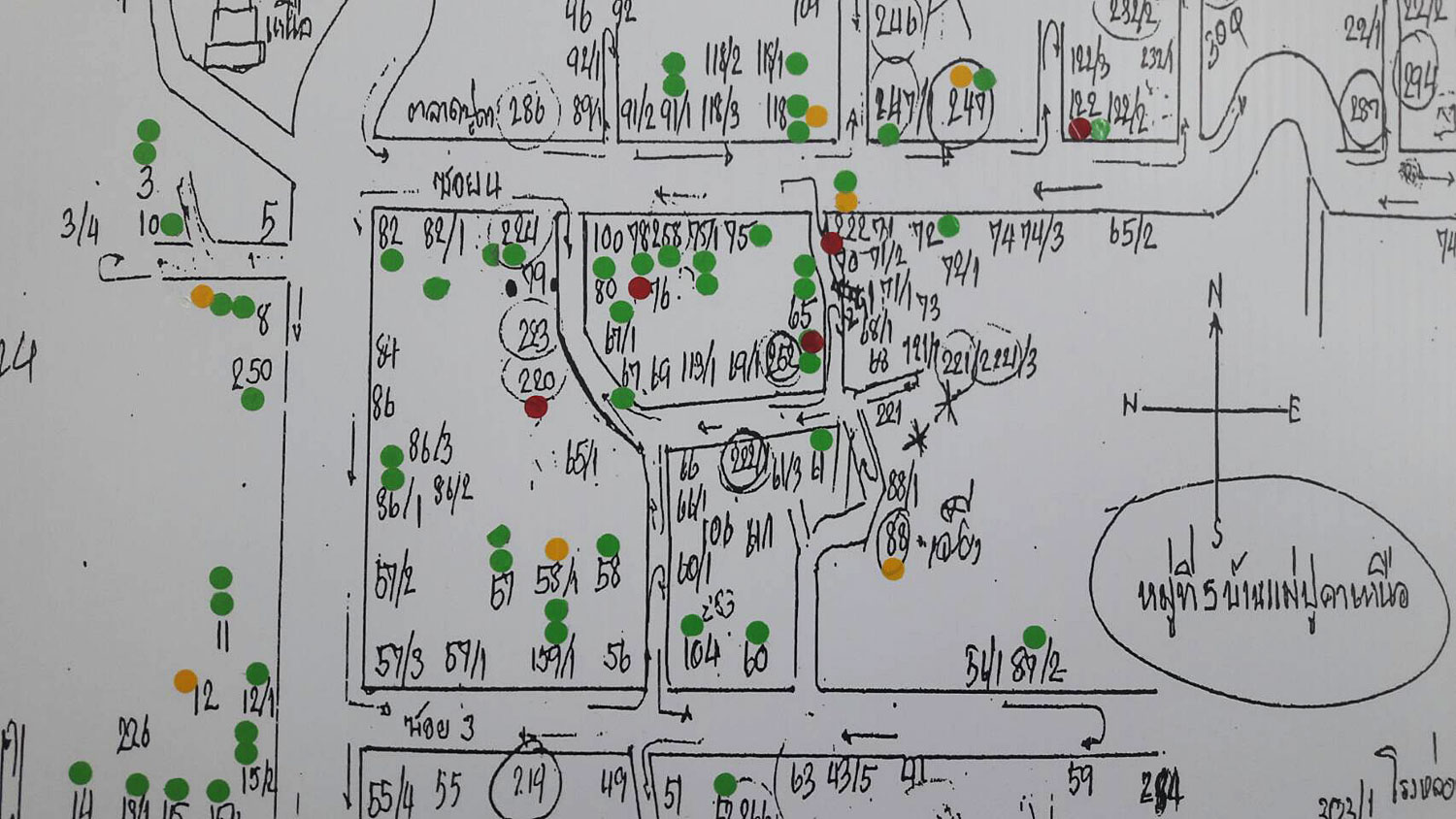 A map is drawn up with coloured dots indicating where elderly people live in a community in tambon Mae Pu Kha municipality of Chiang Mai.

He now regularly visits the new rehabilitation facility on Tuesdays, Thursdays and Saturdays.

Centre staff pick him up from his home, take him to his therapy session and take him home afterwards free of charge.

Namhom Rungruang, 88, is another regular visitor to the centre where she learns and practices routine exercises to keep her mobile and in fine health so she can take care of herself.

“It comes down to personal pride to be able to remain independent,” she said. At her advanced age, she manages to eat, bathe and get dressed on her own with ease.

She also closely follows advice given by staff at the rehabilitation centre. She has learned that consuming less sugar, sodium and fat is hugely beneficial for people her age.

Ms Namhom drops by the centre on Thursdays. Even though she is keeping fit, she stilll consults a doctor on how to avoid diabetes and high blood pressure. 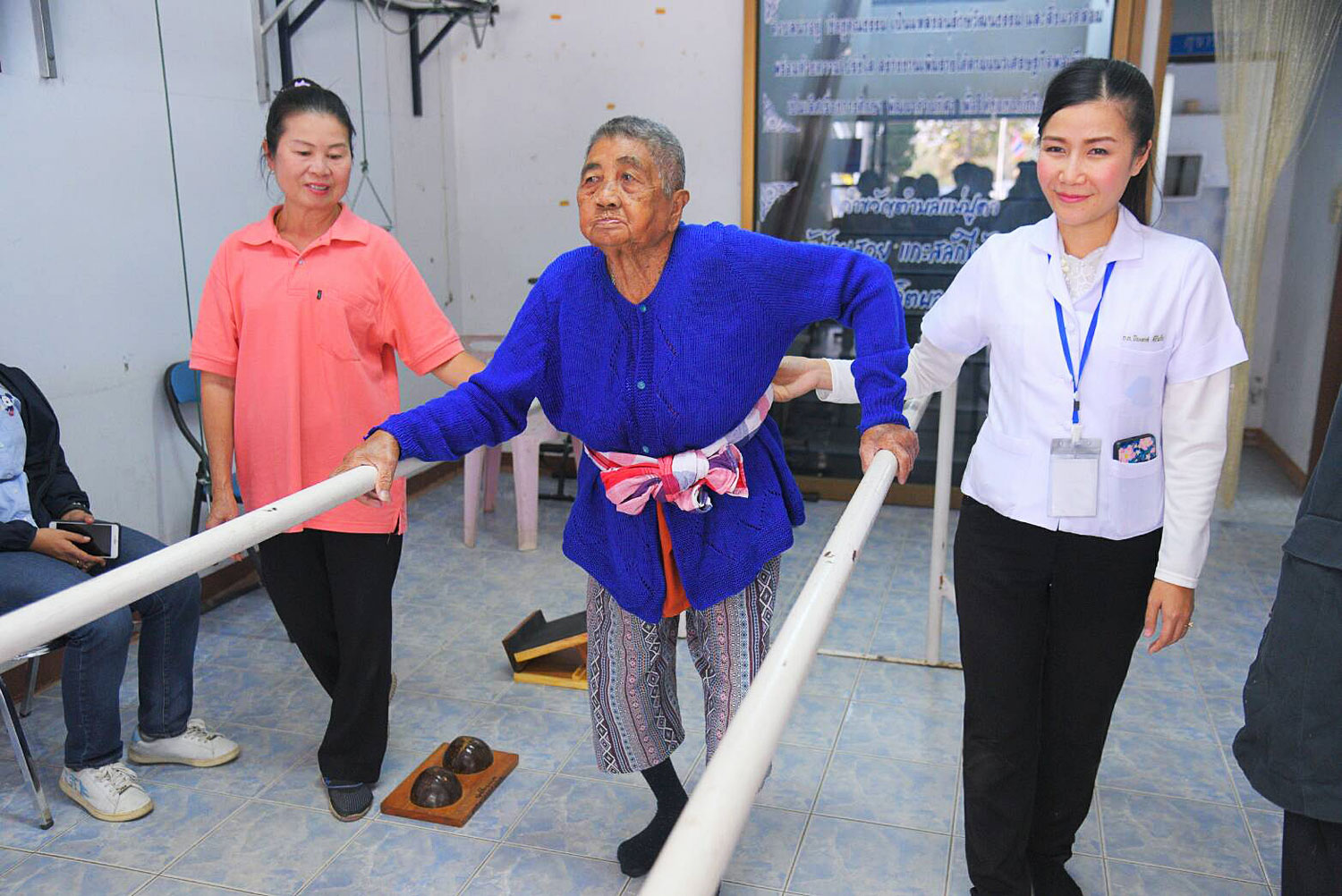 Namhom Rungruang, 88, is aided by helpers as she walks along a double bar as part of physiotherapy at the rehabilitation centre in tambon Mae Pu Kha. photos by Thai Health Promotion Foundation (ThaiHealth) 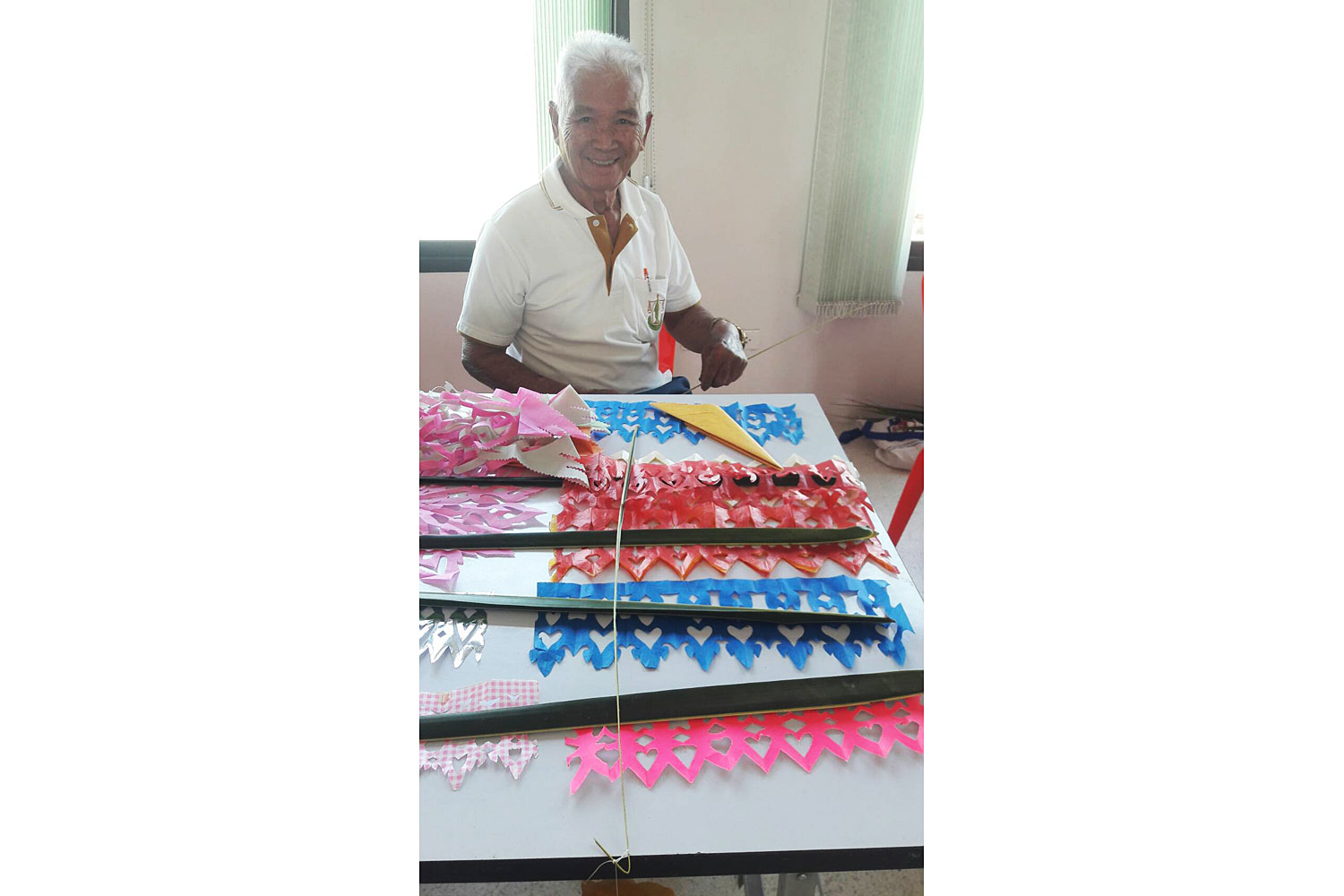 The main reason for her visits though is to recover from a fall she suffered in her home in 2018. Although she was not seriously hurt, doctors advised her to firm up her leg muscles through exercises in order to be more steady on her feet.

Ms Namhom is able to walk further and longer and is more sure-footed. She no longer complains about being tired at the end of short walks, according to her daughter.

Supot Wankon, mayor of tambon Mae Pu Kha municipality, said the centre has motivated more elderly people to be mindful of their health.

The tambon is feeling the impact of an increasingly ageing society with people aged 60 and over accounting for 22% of its population tambon. 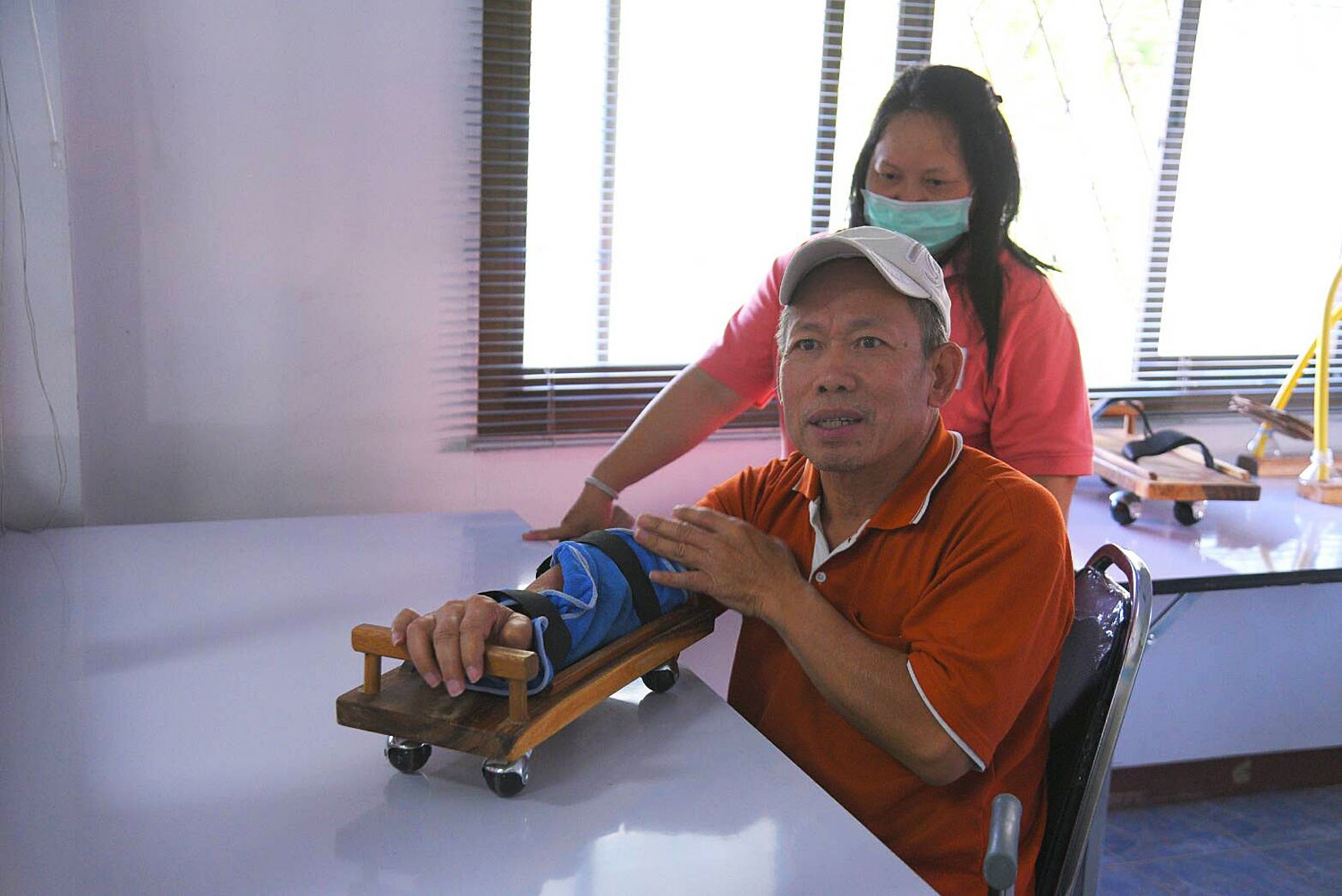 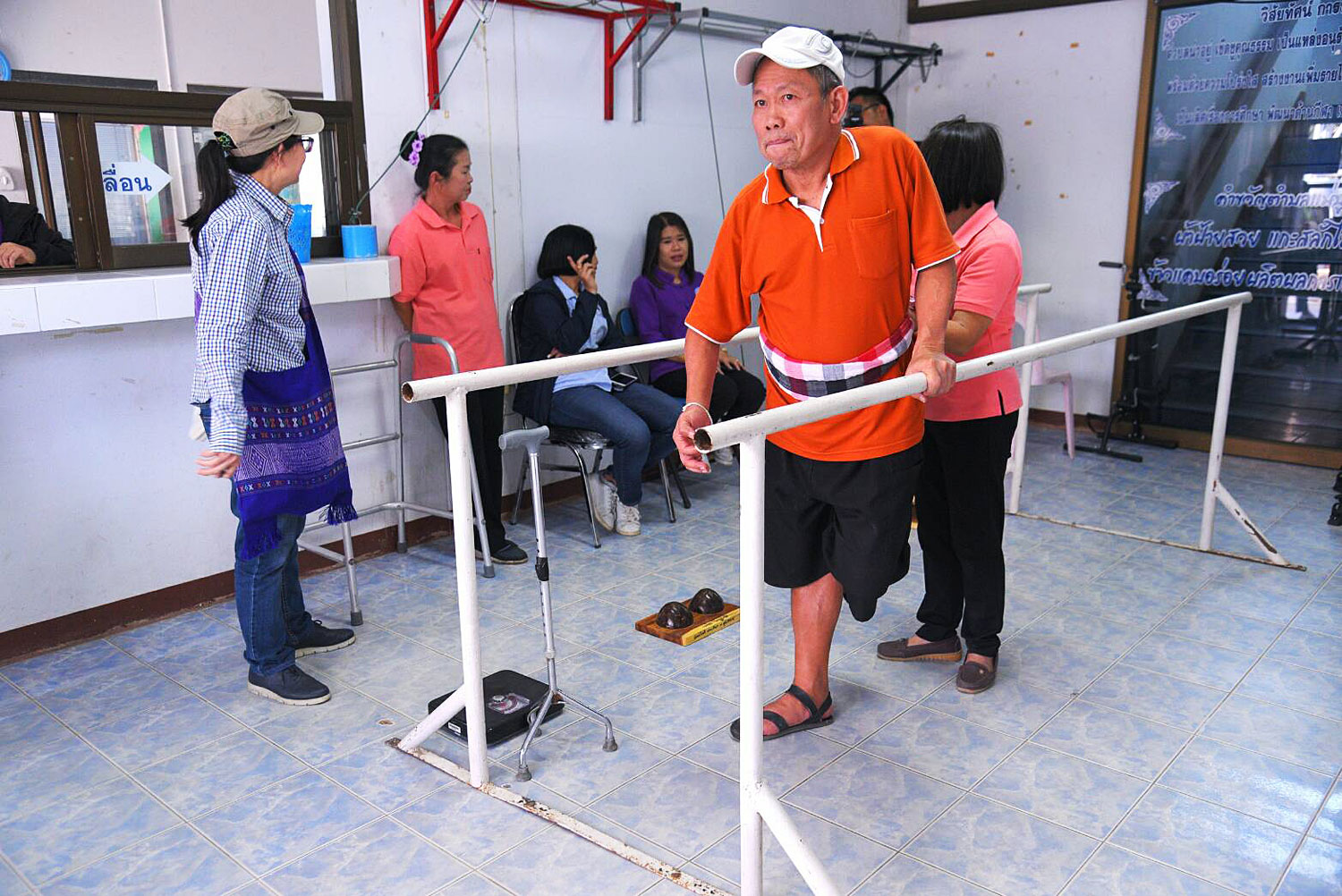 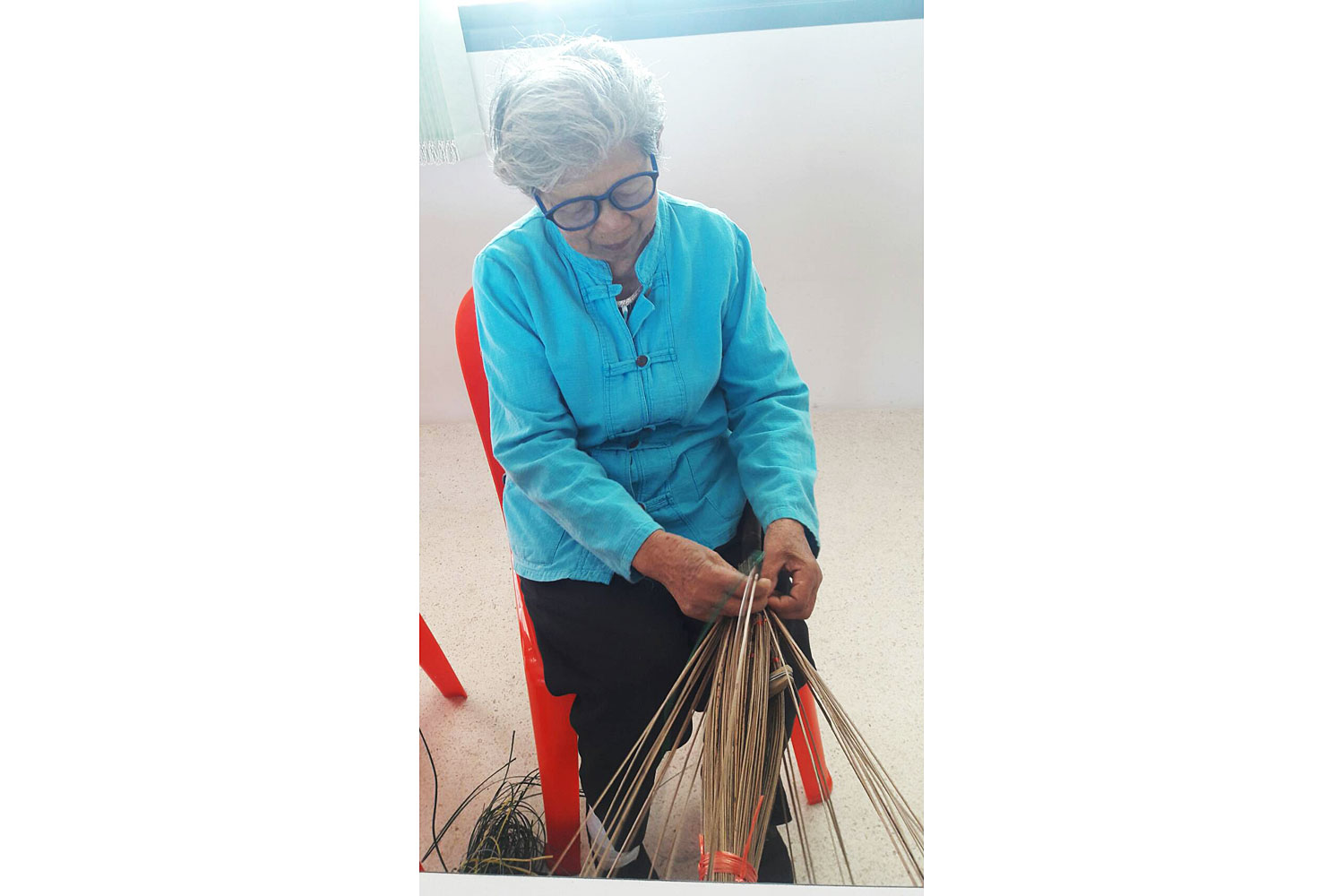 An elderly woman practises weaving as she learns a new skill, which also keeps her mentally calm, at the centre.

Doctors and nurses drop by the centre every week and find many elderly people suffering from chronic ailments associated with age, including high blood pressure, diabetes and heart disease.

For speedy and comprehensive treatments, the municipality has devised a “health map” project for each village in the tambon that shows households where elderly people, including those requiring constant treatment, live.

The maps are marked with coloured dots — green, yellow and red. The green dots represent healthy people, yellow ones an elderly person with a mobility problem and red dots are for those who are bed-bound.

Also detailed is the level of difficulty accessing these people’s homes, information which comes in handy for medics trying to reach these places in case of an emergency and for making house calls.

Of the 1,231 elderly people living in tambon Mae Pu Kha, 1,126 are regarded to be in good health with a fair degree of mobility, according to Mr Supot.

Of the other 105 listed, 72 are seen as being somewhat independent, who find it a challenge venturing out of their homes unaided or un-escorted. The other 33 elderly people are bed-ridden.

The figures, however, exclude the tambon’s disabled population, which stands at 174, said Mr Supot.

Registered physiotherapist Piyamat Sikaeo, who works at the rehabilitation centre, said many elderly people lack the motivation to come to the centre to exercise.

A home visit to check on patients needing physiotherapy, therefore, presents an ideal solution. During such visits, she says, it is important to engage in cheerful conversation with patients and give encouragement to family members or relatives who care for them.

An observation-based assessment of a caregivers’ stress levels and overall mental health is also made while speaking with them during visits, she said.

In cases where signs of stress emerge, centre staff will tailor a solution for the caregivers, she said.

Chiang Mai is one of the top five provinces in the country with the highest elderly population. The others are Bangkok, Nakhon Ratchasima, Khon Kaen and Ubon Ratchathani.

Duangphon Hengbunyaphan, director of the community health promotion office under the Thai Health Promotion Foundation (ThaiHealth), said ThaiHealth is supporting the sharing of information and ideas between communities in efforts to improve care for the elderly.

These communities are encouraged and given assistance in forming a steering committee which consists of several partners, including the local administrative organisation, the Older Persons Welfare Promotion and Rights Protection division, local health officials and educational institutions.

Funding for this comes from various sources including ThaiHealth, the National Health Security Office and local administrative organisations, she said.

Volunteers from local communities are roped in to help deliver the community-based system of elderly care.

Bunsuang Rattnaphrom, 62, who lives in tambon Wiang Kan in Lamphun’s Bang Hong district is one such volunteer who takes part in a community service programme called “Time Bank”, in which volunteers “clock up” the hours of good deeds they perform giving car for the elderly. The “deposits” they make may be intangible but they contribute to the moral uplift of volunteers.

Ms Bunsuang, like other volunteers, makes house calls and attends to an elderly person’s needs. She keeps them company, checks their blood pressure and carries out other good deeds which are all recorded in a health report.

If she thinks extra care is required, a nurse at the local centre is notified and briefed.

Ms Bunsuang thinks it’s a good service, one which she says she hopes will be available to her in the years to come. 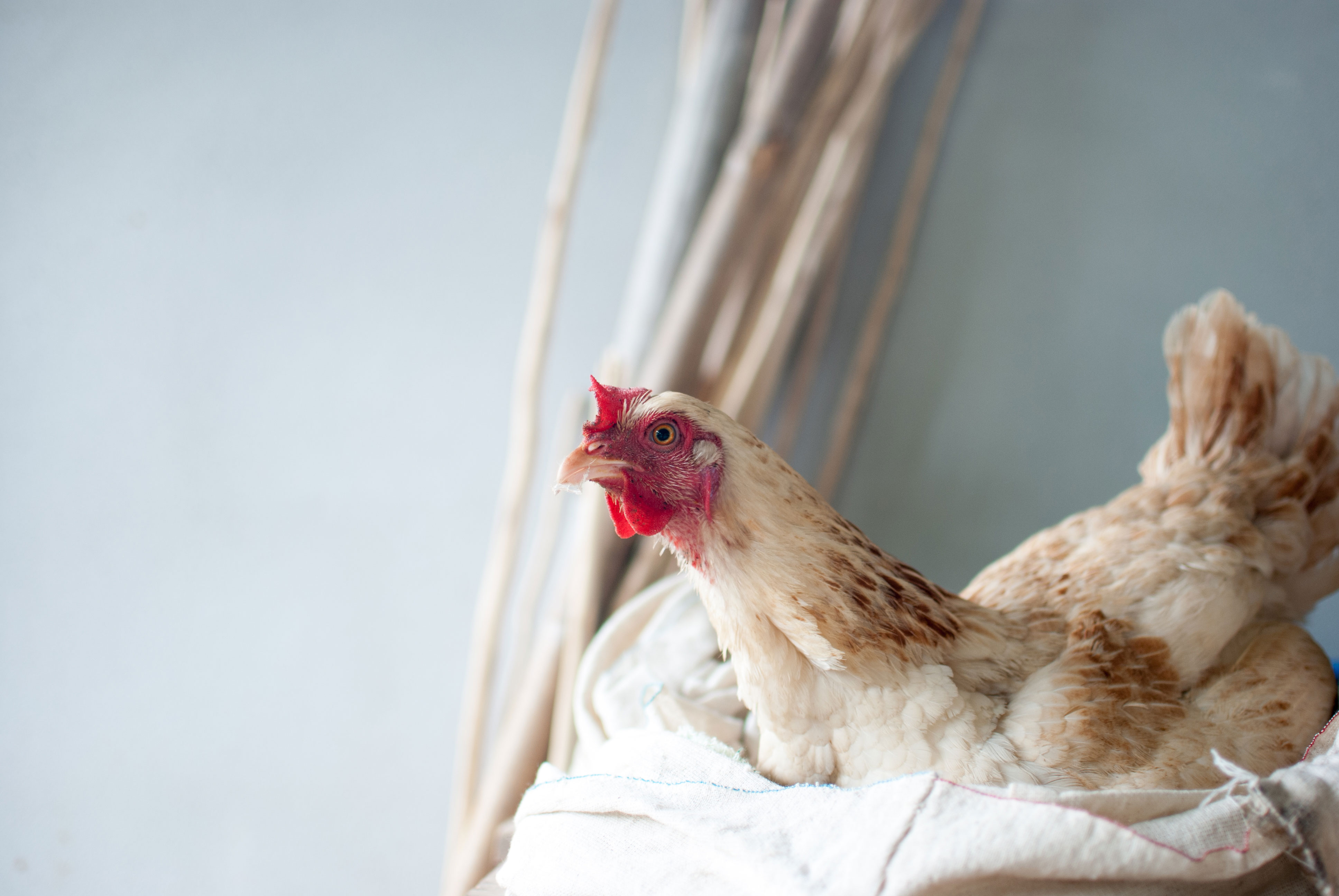